With mobile broadband, portability is key. It’s a broadband internet service that comes to you through a mobile network while you’re on the go, unlike home wireless which generally requires a constantly plugged-in modem.
Compare plans 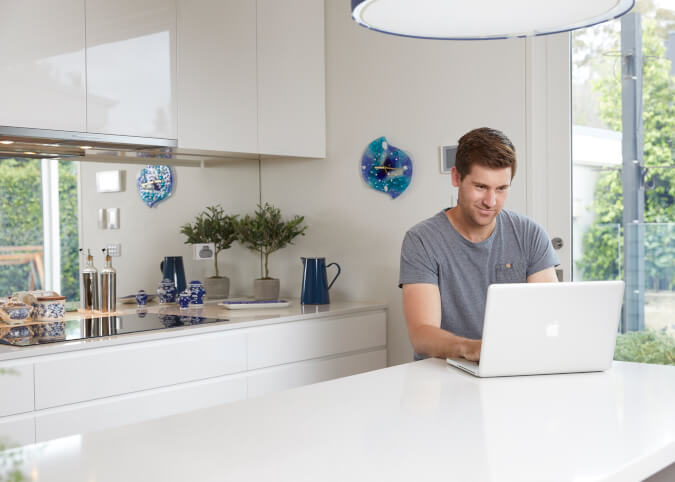 How do I connect?

There are several different ways to access mobile broadband, and the one you choose depends on your budget and lifestyle.

You’ve probably heard about people who use a ‘dongle’, which is one way of accessing mobile broadband. It’s just like a portable modem which plugs into the USB port of your laptop or computer.

If your plan includes a mobile broadband device like a dongle, you may have to pay an upfront fee, but you should be able to set up a wireless network from that device.

Otherwise, you can access mobile broadband by purchasing a data-only SIM with no device. But it means you will only have the internet on that phone or tablet, unless you use the hotspot option to connect other devices.

How does mobile broadband work?

With mobile broadband, you create a Wi-Fi network and can connect several devices to it, just as you would on a normal home wireless modem network. Or, you can use your smart device to hotspot and access Wi-Fi wherever you are.

How is it different to wireless broadband?

Wireless broadband typically involves a plugged-in connection to your home or office, whereas mobile broadband is portable.

Since wireless broadband depends on a modem for your connection, it will need a constant power source. Most mobile broadband connections rely on the rechargeable batteries of your phone, tablet, or dongle.

How about differences in speeds?

The difference between mobile and wireless broadband speeds really depends on the plan you choose and the mobile signal strength in your area. Like any internet service, the speed which is available to you can vary depending on your location. Some areas have stronger fixed internet connections or 4G and 5G service than others.

What are the different types of mobile broadband?

Mobile broadband can be divided into four different types:

This is a very simple way of accessing mobile broadband, as all you have to do is put a data-only SIM into your phone or your tablet. Both contracted and non-contracted deals are availabledepending on your needs.

Contracted options could include higher data allowances at a comparatively lower cost, but you could be locked in for a fixed term.

Non-contracted options can give you more flexibility. For example, you may just need to access mobile broadband for a short holiday or business trip, so getting locked-in for the long term might not suit your needs. While technology continually develops and faster speeds such as 5G become available, you’ll generally have more flexibility to alter your service with this option.

Some data-only SIM cards can come with a big data allowance, but when compared with a fixed broadband service, this isn’t the most cost-friendly option.

The dongle is a popular option with people who frequently travel for work. It can allow them to use their laptops wherever there is an available connection (generally in Australia only): in airports, taxis, hotel rooms or cafes. It comes in the form of a USB device which you plug into your computer or laptop and instantly access mobile broadband.

Pocket Wi-Fi could be described as a portable, mobile broadband modem. Once you activate it, it creates a private Wi-Fi network, allows you to connect to several devices, and, you guessed it, it’s also small enough to fit in your pocket.

Home wireless broadband is not like your other mobile broadband options. This system relies on a wireless home modem which will need to be plugged in whenever you’re using the internet. But, as this modem runs on 4G (or soon, 5G), you can still unplug it, take it to a different location, and plug it in there for instant internet access.

As for speed and contracts, there are generally a few different options with home wireless broadband. The speed is dependent on your 4G connection as well as what you’re willing to pay. In most urban areas, the available speed is of a good quality, and ample for most streaming and general internet browsing requirements.

Why would I require mobile broadband?

While mobile broadband can be a slightly more expensive way of accessing the internet, it can be very useful for many people.

It could be great for people who don’t have a fixed-line connection at home, or for a frequent traveller, or simply if you need internet access on the go.

Some addresses in certain areas across the country don’t have a fixed-line option available yet, so mobile broadband may be one of the few options. Others may want a back-up to rely on if there’s a problem with a fixed connection, or a power outage, as most mobile broadband modems run on a battery power.

Finally, some people simply want to find an alternative to the NBN. If this is you, providing you’re in an area with a good signal, you may be able to get access to similar speeds to some NBN plans with mobile broadband, but be aware that it will probably be more expensive.

What’s the difference between 3G, 4G and 5G?

Think of it like a speedometer; the higher the number, typically the faster it goes.

Around a decade ago, 3G coverage was the most widespread in Australia, and its download speeds were much improved to its predecessor: 2G.

The 4G network, also known as LTE, is probably the one you use to access internet services on your mobile when Wi-Fi isn’t available. This fourth generation of mobile technology is another step up in terms of data speed and voice quality. Most mobile devices will run from 4G, and if it isn’t available in areas like regional towns or tunnels, you’ll usually be automatically switched back to 3G.

From 2020, we started seeing the rollout of 5G across some broadband services, otherwise known as the ‘fifth generation mobile’. This will offer two main new features:

This means you can expect virtually no delay in internet response time. You can also expect 10 to 100 times more connected devices on the network.

Can I get 5G mobile broadband yet?

Some parts of Australia already have access to the 5G network from one of the three major telcos (Telstra, Optus and Vodafone), and as the rollout continues, 5G coverage is becoming increasingly available. To see if your area is already covered by 5G, check your internet provider’s website. If not, then you may be able to find out when 5G will be available for you.

So how do I choose a plan?

Comparing broadband plans can be complex, but that’s where we come in. For a little help untangling some options and exploring a range of internet plans and providers, start with iSelect. With our free service you can compare internet plans on offer from our range of providers and select the one which suits you.