Keep reading to find out more about the technology behind mobile broadband, as well the main mobile networks. 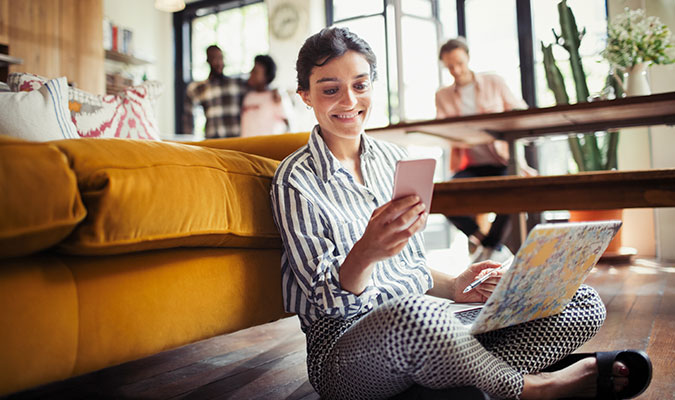 During the Commonwealth Games in March, Telstra’s test network on the Gold Coast gave visitors a taste of what’s to come with free Wi-Fi that hit speeds of 3 gigabits per second (Gbps)1.

That’s about 30 times faster2 than the best National Broadband Network (NBN) speed tier. What’s so revolutionary about wireless 5G technology is that it can achieve ultra-fast mobile broadband, even in crowded city areas and major events.

When 5G arrives you could expect a better mobile broadband experience in more locations across Australia. Download speeds could also be fast enough that buffering will become a thing of the past.

So how does 5G work?

In the early days, mobile phones were affectionately called bricks – big, heavy and not very portable. That was 1G, and you could make a phone call and that’s it.

By the 1990s, 2G introduced4 better voice messaging and the Short Message Service (SMS). It wasn’t until 3G launched in 2001 that data services were introduced, paving the way for smart phones and all the apps that we now use everyday.

With the arrival of 4G4 in 2009, fast mobile broadband turned our devices into mini-televisions. Today, speed can still be an issue with 4G – think of your favourite Netflix show that buffers at a crucial moment.

5G promises to be a giant leap forward in mobile broadband with theoretical speeds from 1-10Gbps in hotspot areas. According to a Department of Communications paper4, by the time Telstra, Vodafone and Optus rollout the 5G network, you could enjoy: Not just yet, but you don’t have too long to wait.

Telstra’s test on the Gold Coast, with free access to 5G Wi-Fi was just the start. Planning for the 5G network infrastructure including antennas and use of the spectrum is in full swing.

Telstra expects Australians will have access to the 5G network in 20205.

Optus and Vodafone are testing their own networks and deciding how best to rollout the technology. Times might vary a little depending on the network provider you go with, but you could expect to be riding the 5G wave by 2020.

In the meantime there’s a lot of planning work in play between the Federal Government and the telco industry. To achieve these high speeds, 5G will use higher frequencies than 4G. These high frequencies don’t travel as far, so the entire network of antennas will have to sit closer together.

These antennas and supporting equipment will be a lot smaller however, so they’ll likely attach to existing infrastructure like buildings and streetlights. The more dense deployment of these mobile cells will allow other approaches that improve the reliability of data transmission across a 5G network.

The Federal Government has convened a 5G working group6 between industry representatives to work towards:

Just how fast will 5G be?

While you can expect anywhere between 2-100Mbps from your 4G network today, 5G will see much faster speeds of between 1-10Gbps. Real-world tests in San Francisco7 achieved 1.4Gbps and as we saw earlier, Telstra’s test on the Gold Coast doubled this speed with 3Gbps.

But ultra-fast speeds are just one feature of the 5G mobile network. There are 7 key characteristics8 that will be required before a network can be classed as 5G:

Data rates—data rates of 1–10 Gbps, which is a step change for mobile networks and is expected to facilitate a high quality and a more seamless user experiences.

Ultra low latency—reduce latency to a one millisecond end-to-end round trip delay.

Bandwidth—provide 1,000 times more bandwidth per unit area than available on existing mobile networks. This will support faster data rates and increase network capacity to support data intensive applications in both the uplink and downlink.

Connections—support the growth of between 10 to 100 times more connected devices than is now supported by existing networks.

Always on—be available everywhere (100 per cent coverage) at all times.

Will I need a 5G device?

You will, but the hardware doesn’t exist just yet.

5G handsets are expected to start showing up next year, with many of the major mobile manufacturers announcing plans to produce 5G phones later in 20199.

Along with the rollout of the 5G wireless network you will see devices from the likes of Samsung, Huawei, Oppo, LG and HTC. As usual, Apple hasn’t publicly announced any plans for 5G enabled devices.