Water has been our most commonly used renewable energy source for 2000 years. In the late 1880s, it was discovered that running water generated power could be converted into electricity. 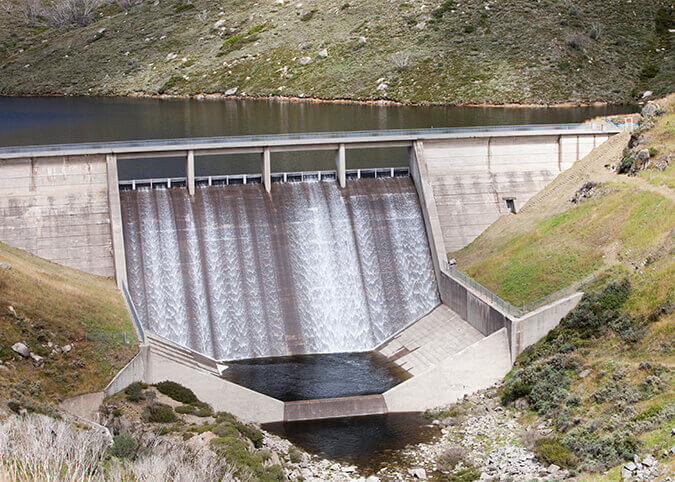 In Australia, hydroelectric power was first used in 1895 to power the streetlights of Launceston, Tasmania. Our largest hydroelectric power producer is the Snowy River Hydro Scheme, which provides over 70% of Eastern Australia’s renewable energy, and also powers the peak hours of major cities including Sydney, Brisbane, Canberra, Melbourne and Adelaide. The Tasmanian Hydroelectric Corporation is our second largest provider, supplying around 30% of the nation’s hydropower.

The most common method of producing hydroelectricity is by pumping dam water, stored in vast reservoirs, through turbines that spin and in turn activate a generator to produce electricity. The force of the water is so powerful that the water produces electricity several times over during this process, and the greater the height at which the water falls, the more power produced.

Learn about Hydropower and other Green Energy Sources

Hydroelectric energy does create pollution in the form of carbon dioxide and methane emissions during the initial establishment stage. These greenhouse gas emissions are created when huge levels of carbon are released from trees and plantlife when the reservoir is initially flooded. The plants rot and drift to the bottom of the reservoir where, decaying with no oxygen, they create vast quantities of methane, which is then pushed into the air when the water passes through the turbines.

That’s the downside. The upsides are many, including the fact that hydropower produces no radioactive waste, doesn’t require the transportation of fuel and doesn’t depend on exhaustible resources such as natural gas or coal.

It’s also relatively cheap to produce as it depends on water, a renewable resource, and not the price of uranium or oil, which enables suppliers to keep prices low for consumers. Most plants are also automated, requiring few staff, which also reduces overheads.

Hydroelectric plants generally have a much longer life span than their nuclear power counterparts, which generally only last around 30 years. Some hydro power plants around the world are between 50 and 100 years old.

Not all hydroelectric power comes from huge dams that require large-scale set-up. Smaller hydroelectric power plants can draw on lesser bodies of water such as a small river to channel water through a turbine. Even small hydro-systems can channel enough electricity into the grid to run a home or farm. For some homeowners, using a small hydro electricity system can be cheaper than solar power, and it will also last longer.

At iSelect, we could help save you money on your electricity rates. Compare energy plans on offer from our range of energy providers* online today. If you prefer, you can also call our friendly team on 13 19 20.