In 2013, Daisy Pearce made history when she was chosen by the Melbourne Football Club as the number one draft pick in the first ever women’s AFL draft.

It was one of many firsts for the 28-year-old Victorian. After captaining Melbourne FC in the inaugural season of the Women’s AFL competition in early 2017, she became Triple M radio’s first female footy caller in April.

Here’s how the superstar midfielder juggles her many commitments without dropping the ball. 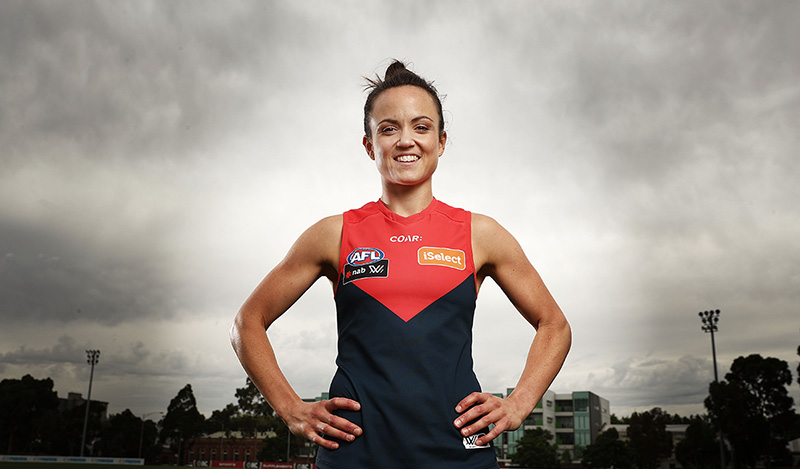 Scheduling superstar: Learning how to organise the chaos

In addition to her on-field and commentating duties, Daisy is a regular host of Game Day on the Seven Network, a columnist for Melbourne’s The Age newspaper, and a member of the AFL Players’ Association board.

She also volunteers at various charity events, including the Royal Children’s Hospital Good Friday Appeal and events for the 500 Supporters’ Group, is an ambassador for the AFL, Auskick, Breast Cancer Network Australia, Premier’s Active April and Change Our Game, and is a spokesperson for skin cancer awareness.

And did we mention her casual work as a registered midwife and numerous keynote appearances at businesses, schools and events? This is all while staying in peak physical condition.

How does Daisy find the time and energy to get it all done?

“It’s all about planning and organisation,” she says. “I write a list nearly every day with what I have coming up, then I order it according to priority and work my way through it.

“I live with my diary open and prioritise what is important to me – I put that in my diary first and foremost, and everything else slots in around that. I am disciplined with how I spend my time, and try to be as efficient as possible.”

It’s not all smooth sailing, though. Daisy says, “The truth is that life is chaotic sometimes. I get changed in my car more than once on most days – from sports gear to workwear to team uniform.”

The key, she says, is knowing when and how to say no.

“I like having variety, so I find having multiple projects or roles quite stimulating. But I’ve learnt that you have to be prepared to create boundaries. Someone or something will always want a piece of you – you have to make sure you don’t hand it all over. Be aware of when you are stretching yourself beyond your capabilities.”

Secrets of success: Pursuing every opportunity to grow

It took Daisy more than a decade to achieve her dream of being drafted into the AFL, proving that success takes a lot of hard work and perseverance.

“When you’re pursuing a passion or striving for success and you start to feel uncomfortable or you’re doubting whether you should give it a go, push through, because it’s usually a sign you’re heading in the right direction and are about to grow. Rarely is something achieved without hard work, or moments of angst or sacrifice.”

“While the perception of many successful people is that they do things with such ease and grace, it is rarely the case. Behind the person there are many challenges, meltdowns, personal crises and daily chaos. If you’re passionate enough about what you do, you can continue despite these challenges.”

Leading up to her roles with the Seven Network and Triple M, Daisy took on as many different public speaking and media interviews with the Victorian Women’s Football League (VWFL) as she could. Over this 10-year period she treated every opportunity – paid or unpaid – as a chance to improve her skills and build her confidence.

“I had to build up a lot of courage and self-belief to put myself out there in a role that hasn’t been done by women in the past.” Remember to relax: Knowing how to unwind

Daisy’s relentless pursuit of her ambitions is clearly paying off. This year she won the inaugural best and fairest award for Melbourne FC’s women’s team, and in 2016 she took home her seventh best and fairest medal in the VWFL.

“While you don’t set out to achieve individual awards, and the premierships are far more satisfying and rewarding, it is nice to have all your hard work and dedication acknowledged,” she says. “It certainly doesn’t come through good luck.”

But how does someone so committed to hard work slow down long enough to relax?

“I like going for big walks out in nature. I love the beach, the bush, the mountains. Even when I’m not training or ‘on the go’, I find exercising very therapeutic, so I do a fair bit of riding and swimming as well.

“I love cooking as a form of relaxation, and can lose entire days in the kitchen preparing meals – not just because I have to, but because I love it.”

In the end, the biggest piece of advice Daisy has to offer those wanting to successfully balance multiple responsibilities is to fully commit yourself to whatever you’re doing at the time.

“I break my day down into blocks and try to be mindful and present in whatever it is I’m doing. When I get to training, I consciously tell myself that I’m at training now, and try not to think about anything else. For the two or three hours that I’m there I am physically incapable of working on my next presentation, so there’s no use letting myself go there mentally.”

Daisy takes that same approach when she’s with her family or relaxing. “I try to be present, not worrying about what I have to do next.”

One thing’s certain – whatever goal Daisy Pearce sets her sights on next, on or off the field, she’ll be more than up for the challenge.

A workplace workout that works wonders

What’s so good about being a private patient?