How the ‘Bikram’ heat of Alice Springs football melted the Dees

Collingwood’s coaching credibility was the hot topic going into their round four clash with Melbourne in Alice Springs. While the Pies weren’t talking about the criticisms of their coach, the Dees made a pact not to talk about the scorching conditions*. (*The author made no such pact, and will make excessive heat references)

With industrial strength fans on the bench for cooling and industrial strength fans in the stands for cheering, the teams ran out to meet the most oppressive opponent of the night, the temperature. In a most un-Australian display, Eskys on the boundary line had their beers and UDL’s replaced with ice vests for the players to wear, designed by Princess Elsa’s Frozen House of Couture.

Collingwood’s week of battling hot air from the media seemingly had them acclimatised to the conditions early. After winning the first centre clearance the ball stayed in their forward for most of the first quarter, affording them several shots at goal and at the camera man in the cherry picker behind the fence. While the Demons kicks found their targets, Collingwood had stashed excess tackling pressure in their overhead lockers on the trip from Melbourne, and continually won the ball Back. Kate Hore got the ball inside the Dees 50 for the first time in the game, and she wasted no time to consolidate. Elise O’Dea celebrated her impressive snap at goal with a war cry that would make Braveheart hide behind his Mum’s kilt. The Dees went into the quarter time break 14 points up.

As the weird sounding fog horn heralded the start of the second quarter of Bikram football, the Magpies took on the game with more conviction than the zero on the scoreboard suggested they had. The Pies spread to contests quicker than heat rash on a tourist to the Red Centre.

Collingwood’s Hope kicked two second quarter goals, as the temperature read 36 degrees. It became apparent there was one strong Mo on the field and 31 other women praying for a 5 o’clock shadow – to give them some reprieve from the heat. Making a case that David Copperfield is a midfield coach at Melbourne, Karen Paxman influenced the ball forward with pure sorcery. So deft at conjuring football magic is Paxman, that one day we will see a homemade sign in the outer which reads “I saw Goody Paxman with the devil” which if you haven’t read The Crucible will make no sense.

Aleisha Newman’s chase and tackle on Cecilia McIntosh was the human version of a cheetah taking down a gazelle on the Serengeti, yet Collingwood had something to prove and continued to grind down the competition favourites.

At the half time break the Auskickers took to the field and the crowd was full of happy looking adults and sweaty looking kids as the grandstand formed an imposing shadow over the ground. Watching cutaway shots to kids in the crowd I recalled the excitement of watching footy from the outer as a child, and also how annoying it is when your parents don’t buy you hot chips. 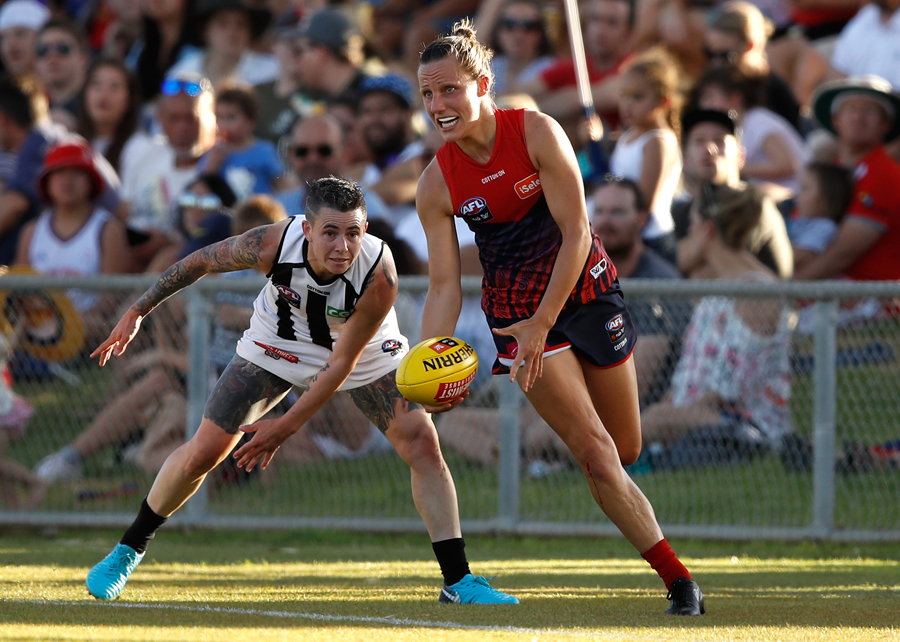 The Pies found the goals and kicked away in the second half. On two occasions the Dees left the front door to the goal square wide open and Collingwood, like Goldilocks walked in, tried all the porridge and all the beds put two easy goals on the scoreboard.

Such easy goals are best summed up by former President and muddled orator George W Bush: “Fool me once, shame on … shame on you. Fool me – you can’t get fooled again”. I’m pretty sure he eant, don’t let someone walk into an open goal square twice in one game.

Chloe Molloy’s match up on Tegan Cunningham was simultaneously a basketball and football fans dream. Cunningham was kept goal-less for the first time this year, despite working so hard that her tatts were dripping off her leaving an inky pool in the goal square. Melbourne’s hard ball getting Katherine Smith tasted the dirt from several parts of TIO Traeger Park which saw her benched with concussion, and her team missed her. While Daisy Pearce certainly didn’t wilt in the heat, she was kept quiet by Brittany Bonnici.

Dees fans were as edgy as a Cat Phillips on a hot tin roof as their team got within 17 points in the last quarter. But the Bernardi and Chiocci show was powered by desperation for their first win. Support for these two stars from Kuys, Hutchins and Barden demonstrated a unified Collingwood who were unbeatable on the night. The hot Pies, deserving of cold drinks as they claimed a 34-point win.

Brought to you by iSelect. Proudly supporting the Groundbreakers.