Night footy at Casey Fields, the scene was set for Melbourne to avenge the “on the road” demons that had possessed them for two weeks. The wind off Bass Strait carried Suzi Quatro’s 1970’s hit Devil Gate Drive across the ground. Was Suzie pre-warning that the Demon’s had brought their devil woman game or would it turn out to be a prophetic warning about the Quatro style, mullet wearing Lion Nat Exon?

Both teams had a lot to play for, their pregame huddles were tight and close and as all football fans know, the smaller the circumference of the huddle, the more centimetre perfect the team will play.

From the first minute the match ups were better than anything the Tinder algorithms could create. Each contest was worthy of a swipe to the right. It would take something special to get the edge on this game. Out of the furnace only minutes into the first quarter, Dees captain Daisy Pearce took her opportunity and kicked the opening goal. It was evident that the captain had run onto the field as her ass kicking alter ego, Daisy Fierce.

Melbourne’s Eden Zanker, in her first senior game, got enough early touches to later thoroughly relax in her well-earned Gatorade shower. But it was the O’Dea, Paxman, Pearce trio that stole the show. For the Lions it was a frustrating giant game of Whack-A-Mole as they would tackle one midfielder only for another to pop up elsewhere on the Ground. 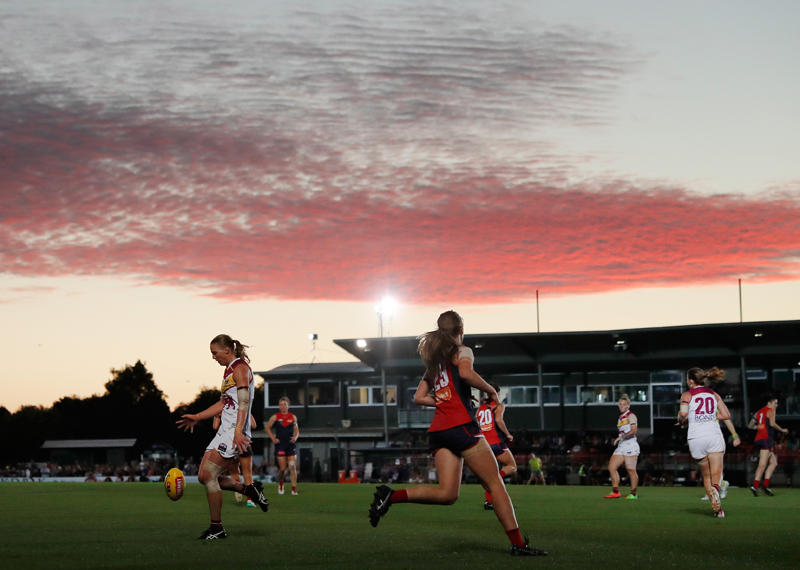 As the smell of fire descended across Casey, the punters concluded it was the temporary lights cranking up, but we were wrong. It was Daisy ON FIRE as she plucked a smothered ground ball up and snapped it across her body for her second goal. She was lit. Cockatoos of biblical proportions circled noisily above the ground, competing in volume with children up past their bedtime using their “outside voices” to scream for their Dees.

The Lion’s remembered who they were at quarter time and their stars, Zielke, Ashmore and Gibson brought cool heads to the contest. The Lions defence was tested but Bates, Hildebrand and Lutkins created a wall Donald Trump would be envious of. Lutkins saved a Rocky Cranston certain goal to make the Lions great again. Kate McCarthy took the game on with a sprint down the wing, which, moments later, inspired the Lion’s first goal from the right foot of Brisbane’s double barrel goddess, Sabrina Frederick-Traub.

But, the Demons were more N’Sync than Justin Timberlake in 1995. O’Dea continued to play out of her flesh coloured Skins. While Melissa Hickey filled a Superwoman sized hole that had let the Dee’s defence down in the week prior. Her kicks from half back set up opportunities to get the ball in scoring range. As a teenage boy in an apron crossed my path for the eleventy-third time ferrying dim sims in a pressure cooker from the starboard side canteen to the port side canteen, the siren called half time. The major break gave me time to wonder if he was paid per dim sim or by the hour.

At half time, Lions coach Craig Starcevich must have pulled some magic words from the en pointe man bag which I’ve seen him tote around the ground (he is so fashion forward). The Lions attacked the second half with a desperation and intensity I’ve only ever seen from Jarrod that blushing wine guy who fell hard for Sophie Monk in The Batchelor. 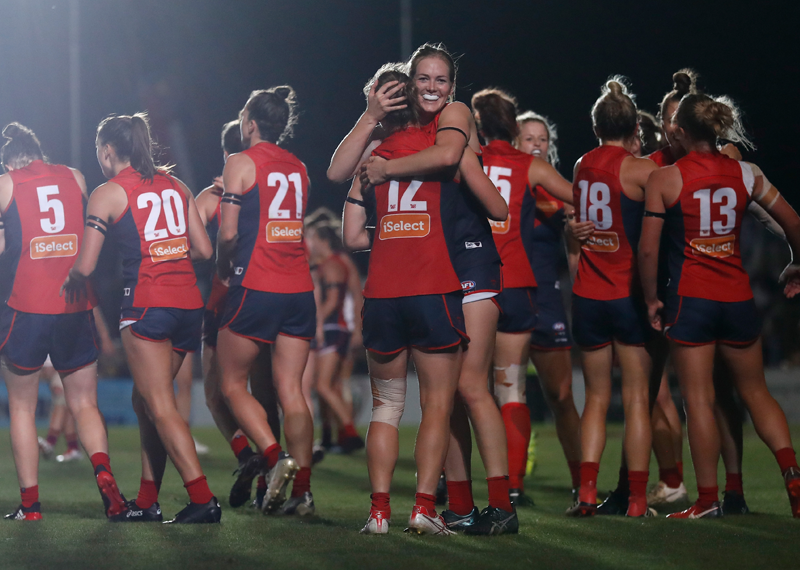 A missed goal by Lion Brittany Gibson masqueraded as a pass to Frederick-Traub on the line who consolidated with a right foot banana. The cunning act was mirrored at Melbourne’s end of the ground by Shelly Scott with a “pass” to Tegan Cunningham resulted in a goal rebuttal. Cunningham’s goal would be her last possession with her nose in one piece, as a late third quarter clash of courage with Nicole Hildebrand saw both players knocked out. Neither would return to the ground, literally leaving their blood, sweat and tears on the park.

Smothers, interceptions and head clashes were the theme of the term. A game levelling goal from Bella Ayre was saved by Bianca Jakobsson, the passage of play from the former Blues teammates inciting a surge of seller’s remorse from Carlton fans watching. Brooke Patterson’s tackle kept the Dee’s alive.

In the final term Jazzy Grierson’s jazzy hands were moved to dazzle in the Dee’s forward line. When Sabrina Frederick-Traub and Daisy Pearce collided, and lay motionless on the turf, the crowd held their collective breath while at AFLW House the head honchos clutched their pearls. Both champions got to their feet wearing a halo of dizzy cartoon stars but played on. A rush of goals had the Lions within six points.

As the teenage apron boy’s FitBit clocked up 10,000 steps for the game, the dim sims in his pressure cooker could empathize with the players on the ground. It was a battle til the end, with the Lions remonstrating on the final siren for a free kick.

But the game belonged to the Dees. Each player shook the monkey off their back, leaving a pile of monkeys on the field. The four points keeping the Demon’s chance to play on that one day in March alive.